What Is It Wednesday: Phragmites

Phragmites is a tall, invasive perennial plant that is most commonly found in wetlands, roadside ditches, and shorelines. It can grow as tall as 5 m (15 ft), spread horizontally at least 3 m per year, and produce a density of at least 200 stems per m2. The native home of Phragmites is Eurasia. How it came to North America is unclear, but it can now be found in every province in Canada, as well as the Northwest Territories. In Ontario alone, this invasive plant spread over 5,000 hectares between 2010 and 2017, which was about a 30% increase from previous years.

Ever wonder what makes Phragmites so invasive? There’s a couple of reasons for this:

These plants have negative effects on environmental, social, and economic factors. The shear density of a Phragmites stand, plus the toxin-releasing roots, decreases the amount and types of plants that can grow in proximity to Phragmites. With less plant diversity comes less food supply and available habitats for wildlife. The stalks of the plants are also too dense and too rigid for most wildlife to move through or use for nesting. In addition, Phragmites have the ability to affect water levels due to their much higher metabolic rate than native plant species, which causes water transpiration to occur at a higher rate. This greatly affects our wetlands that are diminishing in Ontario. They also reduce the amount of nutrients in the soil. At the end of their life cycle, dead stalks do not break down as easily as native species’, which leads to greater amounts of biomass rather than composted material. These dry stalks are also very combustible and pose health and safety risks to people and the environment with the risk of starting fires. Economic losses can occur when Phragmites reduce crop yields and property values. Recreational activities can also be negatively affected, including swimming, angling, boating, birding, and hunting. (Photo Credit: TTLT Staff)

It is highly recommended to work with professionals when managing stands of Invasive Phragmites, but here are a few ways you can help to reduce the spread of the plant in the first place.

Fun Fact: There is also a native species of Phragmites (Phragmites australis subspecies americanus) which is beneficial for wetland ecosystems. Identification between the two can be difficult, especially if they grow along sandy coastal shorelines or in deep water systems. In general, native and invasive Phragmites plants can be distinguished using the parameters shown in Table 1. 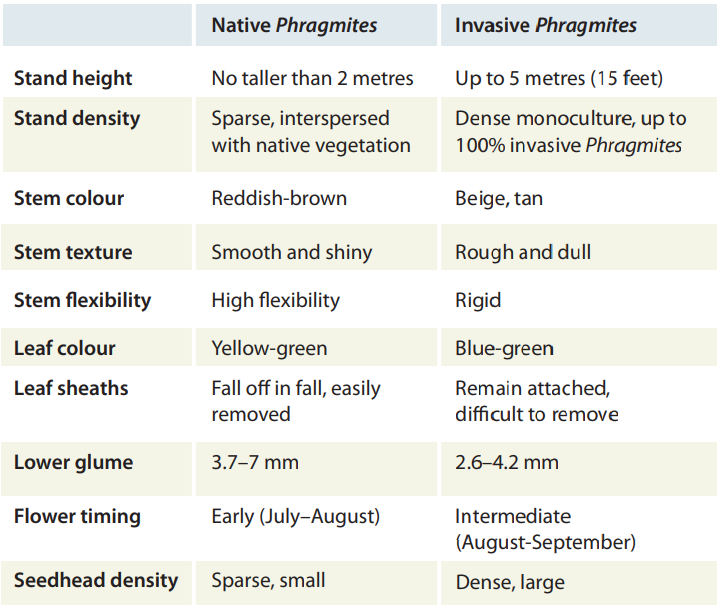