Wetlands are important habitats for many plants and animals. The type of wetland this boardwalk crosses is dominated by woody plants and is known as a swamp.  It holds water through spring and early summer, but it may be dry in August and September.  The dominant trees here are Silver Maples (Acer saccharinum). These trees thrive in the rich wetland soil. Look upward and you will see the smooth silvery grey bark of their limbs arching over your head.  The name Silver Maple also refers to the backs of the leaves that are silvery white.

Stop, smell and listen. In each of the distinct parts of Joany’s Woods, invite your senses to open to something different. 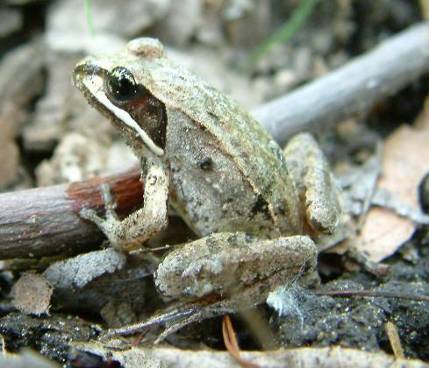 Swamps have not garnered a very good reputation because they are mostly known for mud and mosquitoes. The “pesky” mosquitoes are a nuisance to humans and can carry diseases such as West Nile Virus, but they do help to support other swamp dwellers such as birds, dragonflies and even bats.  They may even help protect natural areas by keeping humans away!

In the spring listen for the persistent call of Spring Peepers (Pseudacris crucifer) or the “quack” of Wood Frogs (Rana sylvatica) here. As tadpoles these tiny frogs are mainly vegetarian, living on algae that they scrape off decaying vegetation in the ponds.  As adults they feed on ground dwelling invertebrates such as beetles, ants, caterpillars, pillbugs and spiders. 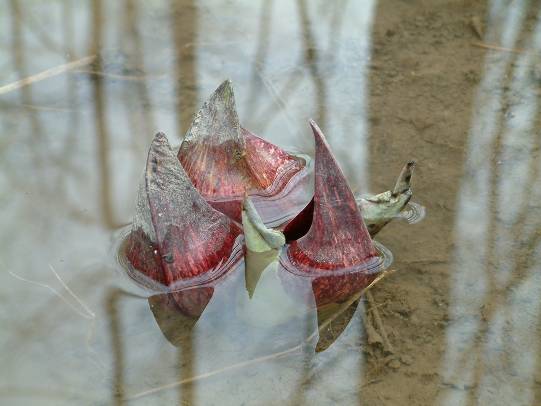 In early spring look for the Skunk Cabbage (Symlocarpus foetidus) flowers that poke through the ice and wet ground before any other plants are growing.  The flowers actually produce heat that causes the snow around them to melt!  The warmth, the dark red colour and the smell of the flowers help attract flies that pollinate them. Later, the large emerald green leaves of this plant start to unfurl. If you smell either the flowers or a bruised leaf you will realize how the Skunk Cabbage got its name.