Most of the trees in this area are Sugar Maple (Acer saccharum) and American Beech (Fagus grandifolia). Both species are shade-tolerant, and often grow together to dominate mature “Beech-Maple” forests in southern and central Ontario. Some forest trees like ash, oak and cherry are shade-intolerant and need openings in the canopy in order to establish, but the young recruits of both Sugar Maple and Beech can grow under the shade created by other species.   A “Beech-Maple” forest is sometimes referred to as a “climax” forest. It develops only after the shade-intolerant pioneers have created a closed canopy forest. Once the shade-intolerant trees have matured and died [a process of many decades] they are replaced by the shade-tolerant Sugar Maples and American Beech. These two species replace each other in the canopy generation after generation 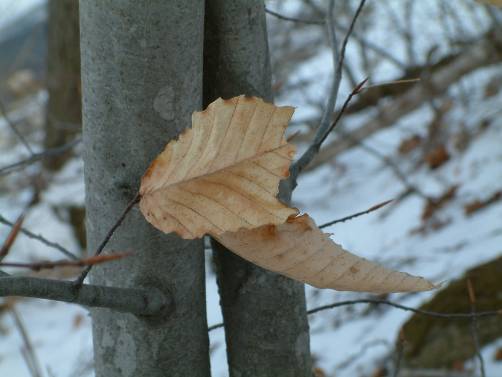 until something like fire, ice, wind or logging open up the forest for other trees and the process starts all over again.

Often in woodlots in southern Ontario the American Beech trees are removed in favour of Sugar Maple to increase maple sugar production, and also because beech wood is generally less valuable than that of maples.  The beech trees can be recognized by their smooth grey bark. Young beech are unusual in that they keep some of their leaves through the winter, even after they have died and turned light brown.