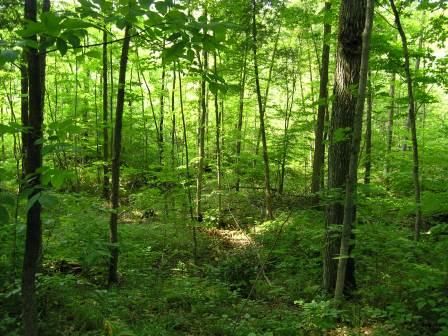 Five Points Forest was donated to the Thames Talbot Land Trust in 2009 by Al and Lilianne Driedger, who wanted to protect the natural features of the land in perpetuity.

The 29-ha (73-acre) property lies on a gently rolling moraine just south of the south branch of the Thames River between Putnam and Ingersoll, adjacent to other woodland patches.

Its low-lying areas were farmed until the 1940s and 1950s and then abandoned. These areas have reforested naturally but also include some older coniferous plantings including White Pine, Scotch Pine and Larch.

The wetland contains several rare plants and there is a good understory of native plants on the property.

Five Points Forest lies within the Reynolds Creek sub-watershed of the Upper Thames River and forms part of three provincially-designated natural areas called the Five Points Woods and the Five Points Wetland Complex. Immediately to the west of the property is a 14-ha (35-acre) part of the wetland complex donated in 1990 to the OHT by E&E (McLaughlin) Aggregates Ltd and managed by UTRCA.