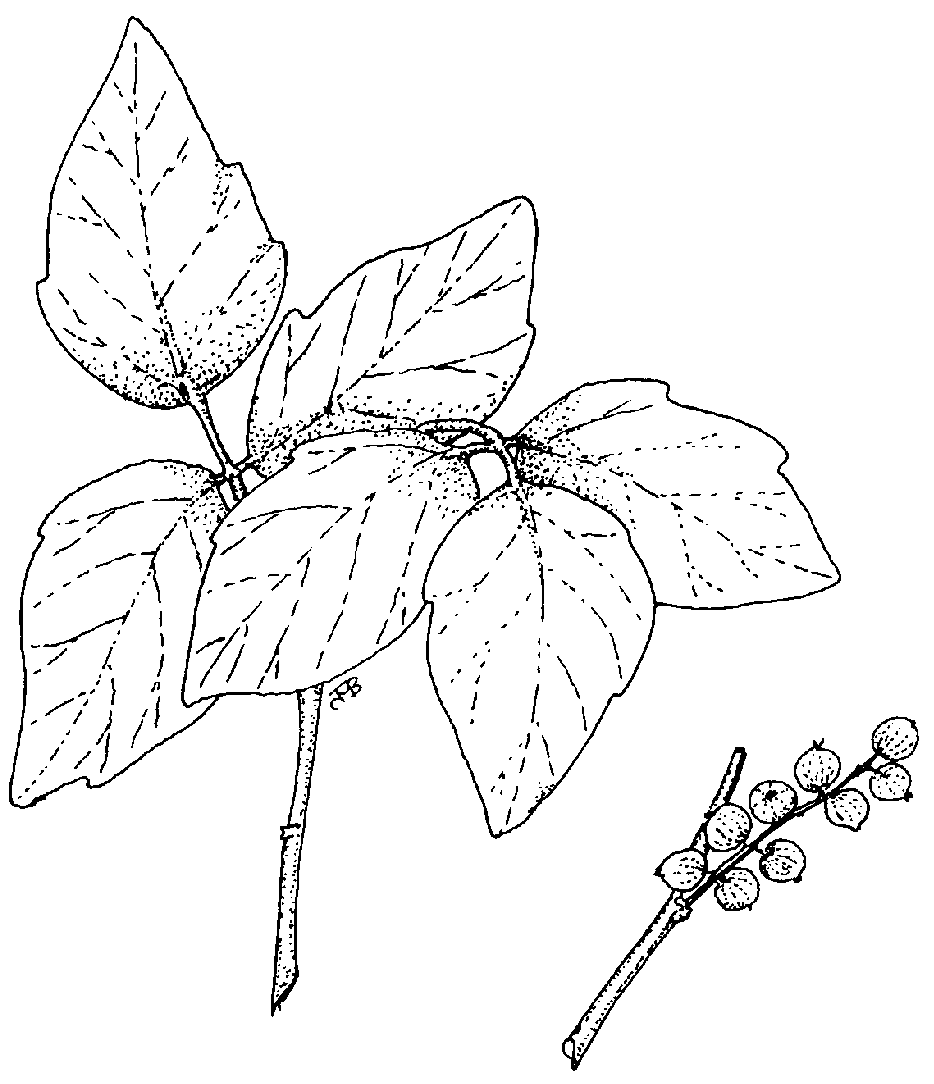 Step over to the edge of the river bank, but watch out for the Poison Ivy!  Poison Ivy (Toxicodendron radicans) is a common native species in southern Ontario.  It can grow as a ground cover, but also as a vine climbing high into trees.  Although toxic substances in the leaves can cause painful irritations in susceptible humans, Poison Ivy is a desirable species in a natural area.  It provides shelter for wildlife and its white berries are an important source of winter food for many species.  The best way to prevent getting a Poison Ivy rash is to learn to recognize the plant and avoid it when you are walking in the woods and fields.  Look for the distinctive dark green “leaves in threes”. 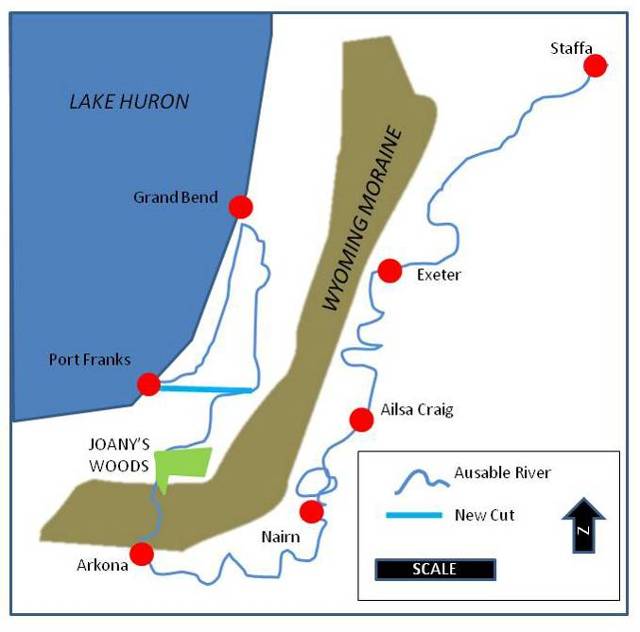 The Ausable River here runs between high banks of glacial till.  Note that the river is confined in a channel nestled in a much larger valley.  The flat land behind you is an old river floodplain terrace, but only very rare flood events reach the old floodplain now.  The Ausable River makes a tortuous journey on its way to Lake Huron.  It rises about 12 km northeast of Exeter, and almost 50 km to the north and east of here.  Between Exeter and Lake Huron is the long ridge of the Wyoming Moraine.  This massive pile of glacial debris runs parallel to the Lake Huron shoreline and marks the edge of the Huron Lobe of the ice sheet that covered this area 15,000 yrs ago. The Ausable River meanders southwards on the east side of this moraine, past Ailsa Craig and Nairn. South of Nairn, it turns westward, still following the edge of the moraine as it too curves westward following the Lake Huron shore.  Finally at Arkona the river makes a breakthrough!  It managed to find a way across the moraine and poured across cutting a deep narrow valley known as a spillway. At this spot, near the south end of Joany’s Woods the river emerges on the other side of the moraine and can make its way to the lake.  But it isn’t there yet!  The land to the north and west is very flat, part of an old lake bed.  Originally the river had to work its way across an extensive area of marshland, later called Thedford Marsh. It wandered all the way north about 18 km to Grand Bend where it used to outlet into Lake Huron, but dune formation along the lake shore blocked its passage.  When it could no longer find a way out past the dunes, it turned south through almost 180o (the origin of the name Grand Bend) and worked back south through the Pinery another 14 km to Port Franks, where it finally reached its destination.  In 1875 the Canada Company cut a channel from the south end of Thedford Marsh direct to Port Franks.  This drained the Thedford Marsh and the rich marsh soils became a prime area for vegetable growing.

WE HOPE YOU ENJOYED YOUR EXPLORATION OF JOANY’S WOODS. PLEASE VISIT OUR WEBSITE AT WWW.TTLT.CA TO VIEW THE INTERACTIVE TRAIL GUIDE AND TO LEAN MORE ABOUT OTHER THAMES TALBOT LAND TRUST PROPERTIES.