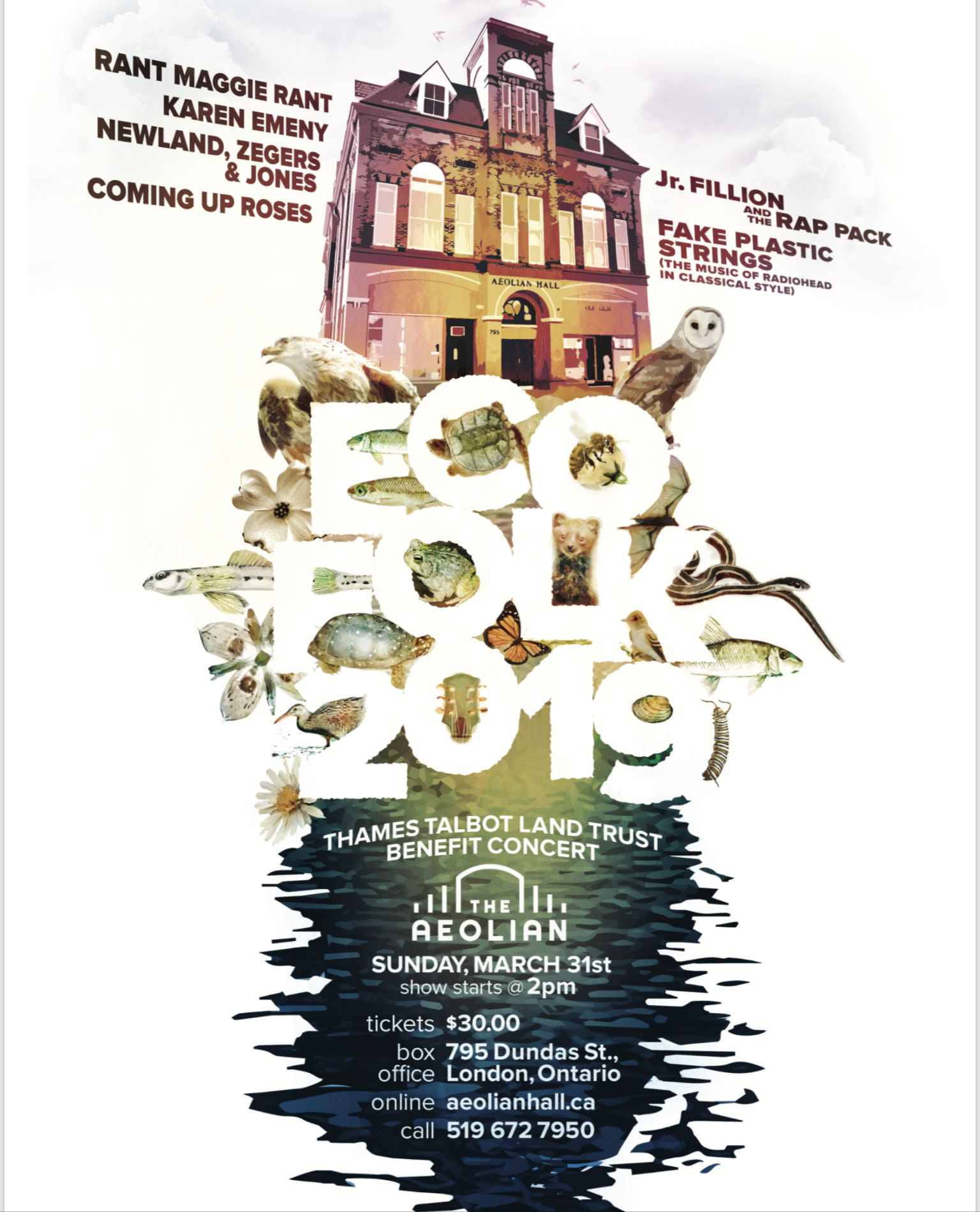 Thames Talbot Land Trust and the Aeolian are pleased to have Anderson Craft Ales as a participant in Eco Folk 2019.  Before the performance and during the intermission, there will be a free beer-sipping event at the Aeolian.  We look forward to Anderson’s collaboration with TTLT at the third annual Eco Folk Enjoy!

All proceeds go to the Thames Talbot Land Trust – a local environmental charity that protects and restores environmentally significant land in the London and surrounding region.

Tickets are $30 and available at the Aeolian Hall box office or online at http://aeolianhall.ca/events/ecofolk2019/

Special thank you to Breck @ Breck Campbell Design for the incredible poster artistry!

With her catchy hooks and honest lyricism, Karen Emeny’s sound is one unconstrained by genre.  Since releasing her debut EP Finding the Words in 2009, Karen has continued to make a name for herself in Canada and the U.S., connecting with listeners through both her passionate singing and songwriting styles.  As a performer Karen has found herself sharing the stage with such names as Chase Rice and Dan Davidson at the London Music Hall, and supporting country heavyweights Thomas Rhett and Dallas Smith at the Trackside Music Festival.  When it comes to songwriter Karen is a storyteller, finding inspiration from the world around her – sharing not only her personal feelings but the qualities of life that touch us all.

Newland, Zegers, Jones is the musical collaboration of cellist Christine Newland, vocalist Stacey Zegers and pianist Brent Jones.  The trio create a unique and moving musical adventure blending styles that reflect each’s distinct history.  Christine Newland, former principle cellist of the London Symphony Orchestra, is a celebrated member of the London musical community, contributing to many projects within the classical and popular music genres.  Stacey Zegers is an accomplished performer and songwriter – known for her solo work and as a member of the country music trio Runaway Angel.  Musician Brent Jones is an active collaborator and artist, producer and performer, based at Quiet Earth Studios in Dorchester, Ontario – home of the Back To The Garden Music Festival.

Coming Up Roses are a London, Ontario musical duo of Justine Jongepier and Noelle Carey. Childhood friends, Justine and Noelle have been performing together since 2016 and endearing audiences with their sunny folk melodies and rich harmonies. In 2017 they released their debut EP and are soon to record their sophomore album. Justine and Noelle enjoy writing original music, finding inspiration in life’s joys, as well as giving their own unique twist to the songs of others. With their soaring vocals, upbeat music and creative acoustic sound, Coming Up Roses are fresh dose of sonic sunshine.

Jr. Fillion And The Rap Pack

A captivating singer/songwriter, JR Fillion is a performer who takes listeners on a journey through musical worlds where challenge meets achievement. Fillion has won multiple awards for his music and creativity, including a 2016 Jack Richardson London Music Fan Favourite Award and a 2017 award for Hip Hop Artist of the year.  JR’s work includes The Missing Link mixtape with Del Reze, Story Up Bud EP with Jux Cain, current solo project Ready to Work as well as sharing the stage with such artists as Peter Jackson, JD Era, Reakwon (from Wu-Tang clan), Sean Price, RA The Rugged Man, Jadakiss, Joell Ortiz and Dead Celebrity Status.  With a rich past and promising future JR Fillion aims to bring positive change to the hip-hop community – to inspire those around him to continue to build and grow their craft.

Sum-01 has an image all her own, influenced by the strong female emcee’s of the early 90’s.   With DJ Hullewud, Sum-01 is a breath of air resonating with Hip-Hop culture purists, and devotes of the old school sound.

Ashley Weisbeck is a London, Ontario singer, actress and model who has garnered a large YouTube following for her blend of soulful pop – with clear heartfelt vocals and an engaging artistic presence.  Look forward to upcoming releases from this talented artist.

Alex Ven is a London based independent producer, DJ and musician, active in the regional scene for many years.  He’s produced material for various London talent including JR Fillion and Alex Foster-Roman.  His powerful performances range from brooding electronic beats to alternative rock with a twist.