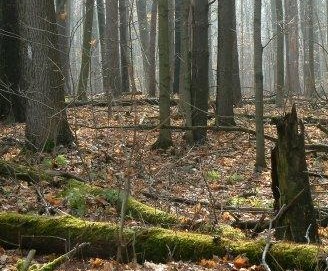 In signing this agreement, Eric and Marsha Eberhardt sought to fulfill the wishes of Hamitage Richardson who entrusted the property to their care. The Richardson family began the work of restoring the site which was, by all accounts, particularly barren at the turn of the century.

In 1910, the Richardsons embarked on an 80-year effort that transformed the face of the farm. Today, the 40.5-ha (100 acre) property stands as a testament to the remarkable stewardship efforts of these two families.

Located in the municipality of East Perth, north of Sebringville, Eberhardt Easement has several distinct zones which are reflected in the easement agreement.

Approximately 12 ha (30 acres) are devoted to the production of certified organic grains and vegetables, with each of its three fields surrounded by hedgerows.

A 3-ha (8-acre) former pasture at the back of the property was reforested in the 1920s and is recognized as one of the oldest reforestation efforts of its kind in southwestern Ontario.

While the site was formerly grazed, a number of the original Sugar Maple and Beech trees survive to this date, and much of the native ground cover – including a variety of spring ephemerals – has regenerated and is now well re-established. The arrangement and variety of species planted – including cherry, walnut, ash, Basswood and pine – give the site a distinctly "natural" appearance.

Most of the balance of the property has been allowed to regenerate to natural cover over the past few decades, and features many early successional species including ash and elm.

With the assistance of area school children and Scouts in the 1990s, 30,000 trees and shrubs – including White Pine – were planted. This part of the property is now largely reforested, providing additional wildlife habitat.

The Eberhardt Easement represents the first formal agreement arising from the TTLT's Headwaters Initiative, which seeks to protect lands of ecological significance at the headwaters of the Thames River – a designated a Canadian Heritage River.